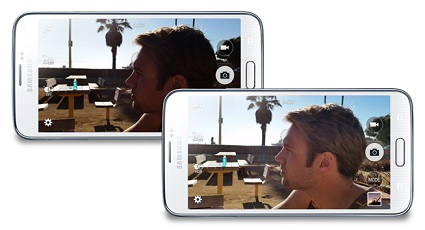 The new Samsung Galaxy S5 smartphone has been described as more evolution than revolution, with Samsung eschewing radical design changes to concentrate on perfecting the features than consumers value the most. The result is a gadget-lover’s delight – a device that strikes just the right balance between novelty and practicality.

But even with so many new and improved features to choose from, a few still stand out above the rest, further separating the S5 from many of its high-end rivals. Here are just a few of our favorites:

If you thought the days of smartphone screen improvements were largely over, it’s time to think again. The Galaxy S5 features a 5.1-inch full HD Super AMOLED display but that’s just the beginning. A tool called Local Contrast Enhancement automatically analyses the local light conditions and adapts the screen brightness so you see everything clearly. That means an optimized display when you are in bright sunshine and a much softer display when you are enjoying a late night movie under the covers.

Another feature called Adapt Display analyses the content that you are viewing and automatically optimizes the color range, saturation and sharpness. The result is a super-sharp display that can be completely customized based on your content and local lightning.

Samsung has been criticized in the past for loading up its mobile devices with unnecessary and gimmicky apps. However, S Health supports a growing trend of consumers incorporating mobile devices into their daily health and fitness routines. Pedometers, calorie counters and heart rate monitors have long been staples of the mobile app stores and now Samsung has incorporated all these and more in one easily accessible suite of apps.

Much has been made of the built-in heart rate monitor positioned on the back of the S5 just below the camera. Some have questioned the usefulness of such a feature but we can see it encouraging thousands of users to think about a healthier lifestyle, and for that reason alone it’s a worthy add-on for any smartphone.

Battery life has long been the Achilles heel of Android smartphones and the Galaxy range has been no exception. To help combat this frustration, Samsung has introduced Ultra Power Saving Mode or UPSM. UPSM doesn’t automatically kick-in when the battery gets low. Instead, it’s up to each user to activate it when they choose.

Once UPSM is activated, the screen turns black and white, the power ramps down, and you are limited to using just 6 apps. Fortunately, you have complete control over which 6 apps you want to remain active. The obvious ones are voice and messaging but you can also choose web browsing (and run your battery down faster) or social apps such as Twitter or Facebook.

UPSM is particularly useful when traveling or near the end of the day when you want to remain reachable but are happy to forego weather updates or a quick game of Candy Crush.

Effective parental controls were a long time coming to smartphones but now they’re here, they are proving to be imaginative and very effective. There are several ways to go with parental controls but here Samsung rejects the all-or-nothing approach of Apple and the iPhone for the more selective criteria utilized by Nokia and its Kids’ Corner.

Each customized Kids’ Mode has its own PIN and its own suite of age-appropriate apps pre-loaded by Samsung. Parents can add to those apps, approve certain media files, and even set the amount of time each child is allowed to use the phone. During this time the phone is essentially locked down for web browsing or other non-approved use but can be returned to ‘adult’ mode at any time.

Place this under the “Why didn’t they think of it before?” category. If you are in a rush to download something – say, a movie or photos of your friend’s wedding – then you can get Wi-Fi and your cellular service to work together to boost download speeds by up to 80 or 90 percent. (The exact improvement will depend on relative network strengths.) Although this will do nothing to improve your data usage, it’s a useful feature to have at your fingertips when you’re in a jam.

OK, this isn’t unique to the S5 but it sure is a wonderful way to enhance certain photographs. HDR stands for High Dynamic Range and it’s a way to combine multiple shots taken at different exposures to produce an optimum image. The real time HDR feature on the Galaxy S5 actually lets you see how your photos can be enhanced before shooting, so you know whether the mode is appropriate or not.

HDR usually works best when there is extreme light – either too much or too little – or in landscape shots where there is little movement. However you use it, it’s yet another tool in the toolbox for the growing army of serious smartphone photographers.

This is one of the few areas where Samsung is playing obvious catch-up. Ever since Apple introduced fingerprint security with iOS 7, you knew it would make an appearance on the next iteration of the Galaxy S series. Not only can you unlock the S5 with a swipe of the finger but you can also initiate certain transactions, including PayPal payments and the purchase of Samsung services. There is no doubt that the accuracy and consistency of fingerprint security will improve over the next couple of years but it’s great to see that Samsung is now firmly part of that added security movement.

The Samsung Galaxy S5 is available for $199.99 from Verizon Wireless. A two-year service agreement is required. For a limited time, Verizon is also offering a ‘Buy One Get One Free’ deal on the S5. A new Two-year activation is required on each device.

The Online Mom LLC receives a fee for participating in certain promotional campaigns for Verizon Wireless.