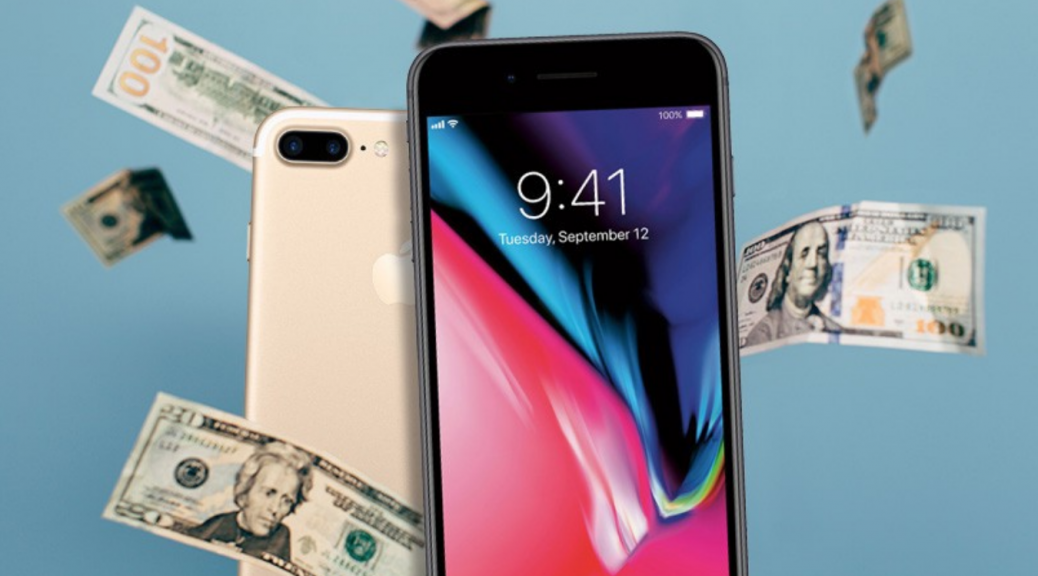 The iPhone 12 has been released in all its glory – or not – depending on whether you’re an Apple products fan. Most carriers will give you credit towards a new phone with a trade-in, but you may do better selling it yourself depending on the condition.

Here are some of your best options.

One of the fastest and most straightforward options is to sell to a buyback service like BuybackBoss, Decluttr, or GadgetGone. All three have a TrustPilot score of 4.6 out of 5 or higher, with a streamlined process for getting a quote. Keep in mind that if the phone quality isn’t quite what you stated or doesn’t match their criteria, the quote may not match the actual buyout, so be brutally honest when describing your device. Before you start getting quotes from multiple sites, check out Flipsy, which compares US trade-in values at multiple buyback stores. Flipsy will show you payment methods, price-lock duration (the window of time you have before you need to send your phone in), and a price based on the old device’s condition. Another option is SellCell that compares buyback prices from over 35 Buyback Companies to ensure you get the most for your device.

Another option, though not a buyback service, is Swappa. They connect buyers and sellers – like eBay but exclusively for devices. A marketplace is almost always going to net a higher price than a buyback, but it means more work on your end. You’ll need to create a Swappa account and connect your PayPal account. You set the asking price (including a sale fee), but no additional PayPal fees may apply.

You can always trade-in your device at Apple for store credit or trade it in for a store gift card at Best Buy, but note neither puts cash in your pocket.

A third option is to sell it yourself via Marketplace, Craigslist, or eBay. While it may bring the highest price, there are risks and hassles involved.

If you go old-school Craigslist, be prepared for lots of “Will you take (less than you’re asking)” and buyers that flake and don’t show up. I highly recommend choosing a SafeTrade location like a police station or law enforcement parking lot. Avoid having the individual come to your home, if at all possible.

Facebook Marketplace allows an added security layer because you can check your buyer’s profile before committing. You can also control where your listing is seen and by whom.

eBay is another option but be prepared for additional fees and shipping if you’re selling outside your immediate area. eBay charges a sales fee of 10% of the final selling price for products sold through its platform. If you accept payment through PayPal, it charges an additional fee of 2.9% (4% if sold internationally). The upside is that eBay offers buyer protection, so there’s an added layer of credibility Marketplace and Craigslist lack.

Whichever you choose – Marketplace, eBay, or Craigslist, make yourself very clear before you meet up with your buyer. They should know the exact price, bring cash only, the phone’s condition, and its wireless carrier – especially if the phone isn’t unlocked – in advance.

Whatever you choose, do a little homework before you start. Take your time and weigh your options, and be aware of the value not only of your device but your time. Happy selling! 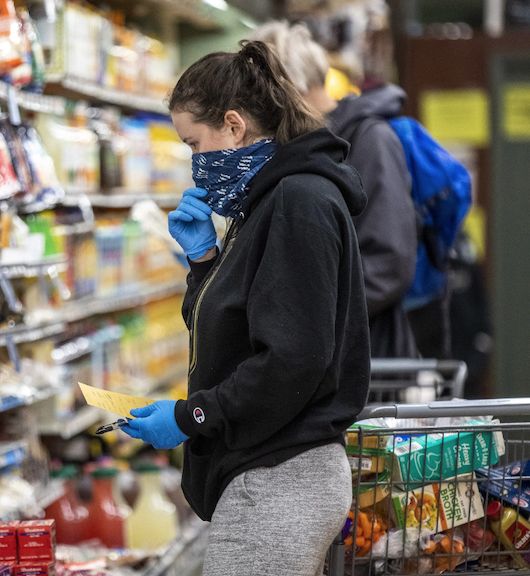 While even the most introverted among us are ready to start socializing again, we’re also apprehensive about what life will look like as the country starts to re-open. As it’s been from the beginning of the pandemic, foremost in our minds is how to stay safe, flatten the curve, and protect those around us who are most vulnerable.

It’s important to stay vigilant and not think that this is over. The threat of a second wave remains, but as restrictions lift and we begin to venture out, these precautions can protect you, those you love, and the strangers you’re near in the frozen food section stay safe and healthy.

Keep wearing your masks – even homemade ones. In a blog post, the American Lung Association addressed the issue of whether or not homemade face coverings were effective. “These types of masks are not intended to protect the wearer, but to protect against the unintended transmission — in case you are an asymptomatic carrier of the coronavirus.”

Don’t stand so close to me. Growing up, I remember a nun at a school dance rebuking us and telling us to “leave room for the Holy Spirit” if couples danced too closely. That’s not a bad idea in this season. Stay six feet apart while you’re shopping, walking the dog, waiting in line for carry-out, etc. If you have food delivery, pay and tip when you order, then when they drop off thank them through the door and wait for them to walk away before you open the door and take your food. Open the packaging, throw it away, wash your hands thoroughly, and then eat.

Move it along. Yes, we’re all desperate to be somewhere other than our sofa, but limited exposure to one another is still a key element of flattening the curve. If you need to be in a store, use a list to help you shop quickly and efficiently.

Go hands-free when you can. Instead of tapping out your pin with your fingers, use your knuckles. Flip switches with your elbow, use the automatic open accessibility option for those with mobility issues, pull doors open with a foot or the crook of your arm – get creative. You’re more likely to touch your face with a finger than your foot or your elbow – it’s a little change that goes a long way.

Do your best to touch only what you intend to purchase. Items like canned goods or boxes of cereal can easily be wiped down, but not so with items like fresh produce. Instead, wear gloves or use the plastic bags available in the produce selection to avoid cross-contamination.

Speaking of washing your hands, wash your hands. It’s recommended to wash for at least 20 seconds both before you go out to protect others and when you get home to protect yourself. If you’re unsure of how long 20 seconds lasts or bored with counting “One Mississippi, two Mississippis” every time, #washyourlyrics takes your favorite song and generates a handwashing infographic complete with lyrics and proper handwashing techniques.

Money money money money. Cash is notoriously bacteria-ridden, and at times like this, a potential carrier for COVID-19. Use your debit card (punch in that pin with a knuckle), PayPal, Apple Pay, Venmo, Google Pay, Samsung Pay – you can even send or receive money through  Facebook Messenger.

Despite the fact that virtual wallets have been around for a while, we’ve been slow to jump onboard. In fact, according to a study by the Federal Reserve, only 13 percent of consumers use their mobile devices to pay at restaurants or retailers. Why is that? About half of us trust our phones for mobile banking, so why have we been hesitant to take advantage of a mobile wallet?

On the plus side, it’s a simple process. You download an app, enter your credit card information, and when you’re ready to make a purchase, simply open the app and have the cashier scan your device or tap it on the pad.

Experts say mobile payments are safer than a magnetic strip debit or credit card, which holds your name, card number and expiration date encoded on the stripe without protection. Most apps generate a unique bar code for each transaction instead of transmitting your card information, and going one step further, Apple Pay doesn’t even store credit card data. New, more secure debit and credit cards are set to launch in October, but until then virtual wallets seem to be a safer option.

On the downside, you can’t use mobile payment options everywhere. Despite developers best efforts, not every retailer and restaurant can or will accept mobile payments. Of all the options, Google Wallet and Apple Pay are the most widely accepted, but with retailers like Target and Wal-Mart launching their own versions, it appears no one system will be universal.

Here’s a look at some of the major players so you can decide if mobile payments are right for you.

The iPhone 6 and 6 Plus come with an NFC (Near Field Communication) chip embedded in the top of the device as well as an SE (Secure Element) chip that generates a one-use code (a token) for every transaction instead of transmitting your debit or credit card number. The token can’t be used again for subsequent purchases and is only matched to your card by the bank. The iPad Mini and iPad Air 2 also come with Apple Pay but don’t have NFC, so you’ll only be able to use them for in-app purchases.

iPhone 5 and older users will need an Apple Watch to use Apple Pay, since the watch is tethered to the phone and will use your Touch ID to make purchases. The app works in Airplane mode, uses a fingerprint reader for added security and is supported by roughly 300 banks in the U.S. The Apple Pay website reminds us that Apple never sees details of your purchases and provides a complete list of participating banks both in the U.S. and U.K.

The second major player is Google Wallet, which in theory is similar to Apple Pay but in practice quite different. Using NFC technology, Google Wallet creates a MasterCard number unique to your phone. There’s no credit check and you won’t receive a physical card, only a number. When you pay, the retailer gets that number and the debit or credit card you’ve attached to the account is charged. However, unlike Apple Pay, Google Wallet sees every purchase you make. It also works as a peer-to-peer payment system, allowing you to transfer money to another account.

Your favorite one-click, online payment service is also getting into the mobile wallet game. The newest version has customers “check-in” when they enter a store that accepts PayPal payments, which then transmits your account details to the retailer. Cashing out is then as simple as telling the cashier you want to use PayPal. The store simply matches your account to your purchase. As an added plus, the app is available on Android, Apple and Windows Phones.

According to Google, Android Pay is more secure as it doesn’t include your actual credit or debit card number with your payment but instead generates a virtual account number, thereby keeping your personal details safe. Android Pay will also make use of the native fingerprint recognition software coming in Android M (the next mobile operating system update), though it should work with NFC-equipped devices with Android 4.3 and above. Once launched, Android Pay will be for tap and pay, and Google Wallet will primarily be for peer-to-peer money transfers.

To paraphrase a quote loosely attributed to Mark Twain: If you don’t like the mobile payment options out there now, just wait six months. Retailers, developers and other major players are constantly working to improve the tools and draw you in. Mobile payment technology is certain to become more user friendly and secure as more consumers get onboard.