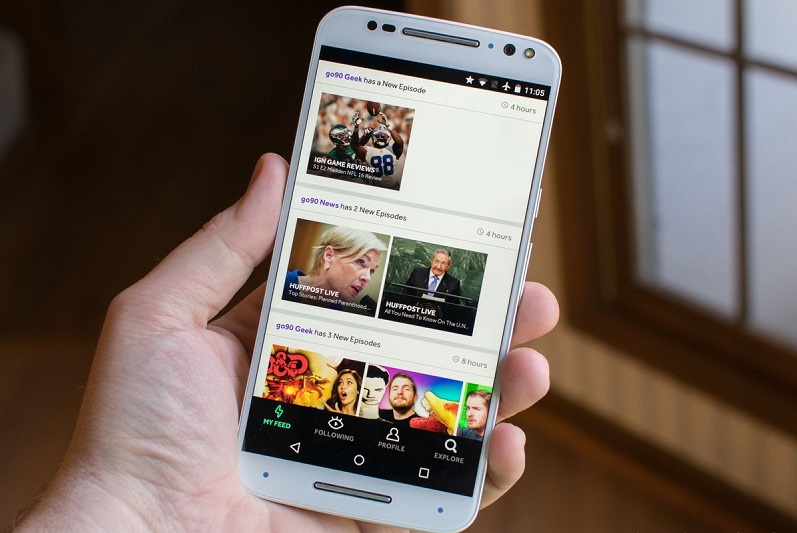 The video choices available to mobile users just got a big boost this month with the launch of Verizon’s go90 app for iOS and Android devices. Go90, which is ad-supported but subscription free, is aimed at younger users who spend more time watching video on their smartphones and tablets than watching traditional TV. The go90 name comes from the way users flip their phones 90 degrees to watch videos.

Rather than fighting the trend away from the traditional cable TV subscription model, Verizon has instead embraced the movement, first offering CustomTV packages and now over-the-top content strictly for mobile devices.

Go90 is launching with 8,000 titles and over 35 original series, which will grow rapidly in the coming months. The lineup includes networks like Comedy Central, The Food Network, ESPN, Discovery Channel, MTV, VH1, Spike and HGTV. Going forward, go90 will also add live sporting events and concerts. Although the service is available to everyone, no matter which wireless carrier you use, there is also some exclusive content just for Verizon customers.

Once you download the app, there is a simple sign-in screen where you set up a username and password. You are then asked to tap on a few favorite content categories, which include comedy, entertainment, and news and sports. There is also a “geek” category. The app then presents you with your custom feed of suggested shows and videos, similar to Facebook or YouTube. For now, go90 users seeking news will get a heavy diet of HuffPost Live but, as mentioned above, the app is expected to bring on additional content at a rapid pace.

You can also search out specific channels, shows, people or “crews” to follow. For example, if you search for Jennifer Lawrence, you are presented with a stream of video clips, including trailers for The Hunger Games movies, Silver Linings Playbook and American Hustle. By following particular shows or people, you will further customize your go90 feed.

Crews represents the social media element of go90. You can either start a crew yourself or join a crew that already exists. Movie Lovers, Urban Dads, honest talk, and NFL Fantasy Players are just four of the dozens of crews that have already been set up. Conversation in these crews doesn’t appear to be moderated, although there is a button to report inappropriate content.

Go90 looks to be a strong addition to the world of streaming media for mobile devices and has obvious appeal to a younger audience. A promotional offer of an extra 1GB of data per month for 3 months gives Verizon customers an added incentive to jump on board!

The Online Mom LLC receives a fee for participating in certain promotional campaign for Verizon.