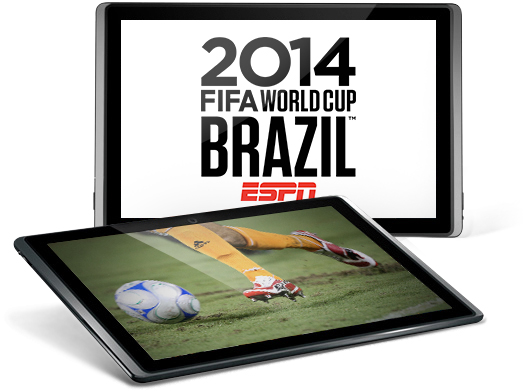 This summer’s World Cup in Brazil has been an amazing tournament – full of goals, unlikely comebacks and the surprising success of a few unsung nations. And then there is the unexpected emergence of Team USA from the so-called Group of Death, which seems to have energized the whole country and given a welcome boost to a sport that mostly lives in the shadow of football and baseball.

The friendly time zone of the host nation has meant that most of the games have taken place during the day, rather than early morning or late at night. And while that in theory makes the matches more accessible, it also means that the living room couch is probably not an option. Hard core soccer fans and casual supporters alike have to be a little more resourceful to make sure they are in front of a screen for their favorite games.

Luckily for Verizon FiOS customers, the start of the World Cup coincided with the addition of six new out-of-home live TV channels, including ESPN, ESPN 2 and Univision Deportes, which between them are carrying all 64 matches of this year’s tournament. That means FiOS customers can use the FiOS Mobile App to live stream every game.

The FiOS Mobile App is compatible with the iPad, iPhone, most Android tablets and phones, and Kindle Fire tablets, giving FiOS customers a wide range of portable TV screens for their own personal viewing. And of course, out-of-home viewing doesn’t stop with the World Cup. The six new channels brings to 40 the total number of live channels available through the FiOS Mobile App, including CNN, Disney Channel, Food Network, Showtime, STARZ, and many more.

Movie fans have an even wider choice, with over 60,000 on-demand titles available and free and subscription offerings from HBO, Cinemax, Encore and more. The FiOS Mobile App also has strong parental controls, so you can make sure that your kids see only the shows you want them to see.

The day has finally arrived when we no longer have to worry about missing the next big game. With FiOS and the FiOS Mobile App, our TV screens are with us wherever we go!

The Online Mom LLC receives a fee for participating in certain promotional programs for Verizon FiOS. All opinions are my own.