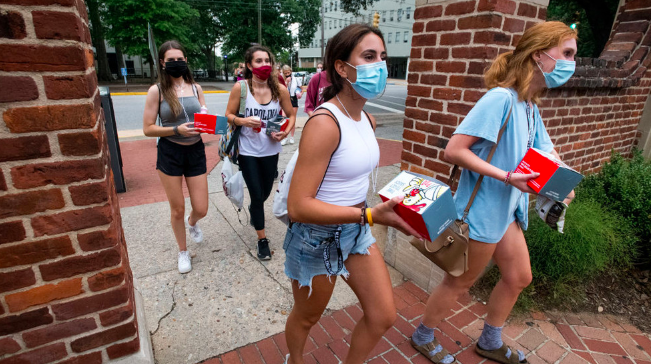 Like everything else in our lives, students heading off to college will be heading into uncharted territory. While many schools are keeping classes virtual this Fall, some higher learning institutions are implementing changes to resume in-person classes despite COVID-19. Students will be required to be tested, wear masks, and maintain a safe social distance.

Secondary education can be costly, and the challenges that COVID-19 restrictions place on students means that money will be even tighter for many. The good news is, whether online or on-campus, students qualify for discounts on a multitude of products and services.

Students can start by asking what discounts are available on devices and software at the campus bookstore. If your student lives on campus, have them talk to the school’s housing department about any streaming services that may be available for no additional charge. Once they’ve done their homework there, it’s time to check out these deals.

Spotify Premium with Hulu and Showtime

My recommendation is Spotify’s $5 ad-free bundle that includes both Hulu and Showtime. Purchased separately, they run $10, $6, and $11/month, respectively, for a total of $27, so the plan represents significant savings and a massive library of entertainment. Students who already have a premium account can switch to the student version.

In addition to hardware discounts, Apple offers its Music subscription service at half price for students – $4.99 a month vs. $9.99 – providing access to over 50 million songs. You also get Apple TV Plus free for one year.

Regularly priced at $11.99 a month, students can get YouTube Premium for $6.99 with a subscription. Watch ad-free YouTube videos (also available to download them for offline viewing) and take advantage of unlimited access to YouTube Music. As a standalone service, YouTube Music is $4.99 per month for students (regularly $9.99). YouTube offers a free one month trial, so it’s a good idea to set a calendar reminder to decide before the trial period is up. 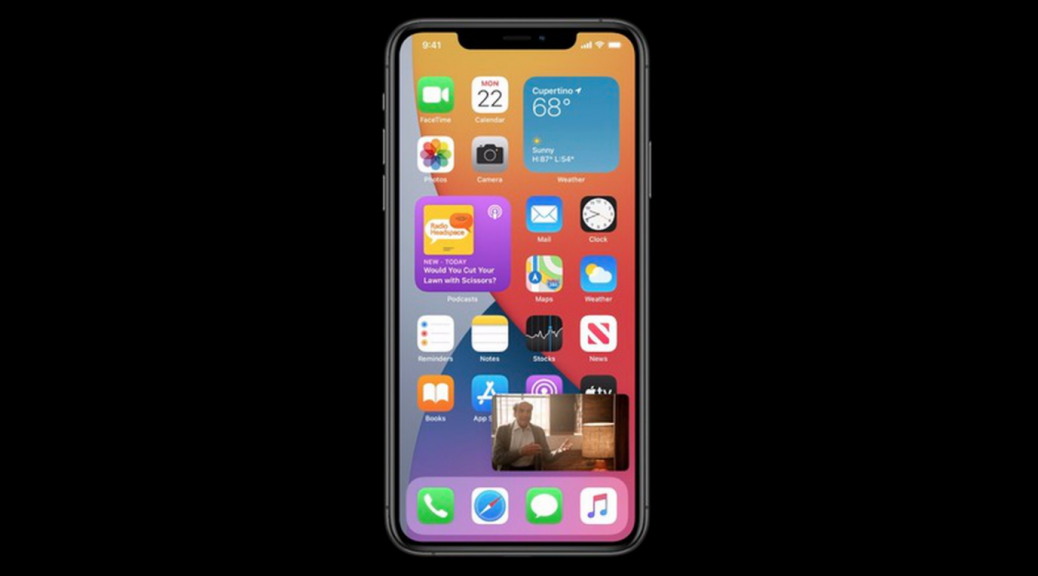 Hey kids, Apple’s doing it again. iOS 14, slated to be released this fall, comes with a whack of fun new features that will make you love your phone even more, and make Android users smile. More on that later.

For me, one of the most exciting new features allows users to pin a conversation to the top of messages. If you don’t get a lot of texts in the run of a day, this may not seem important, but at a time when many of us are still at some level of quarantine and several states are rolling back re-opening plans, keeping in touch via text is more essential than it’s ever been. For me, having my family group text pinned to the top saves me scrolling through multiple texts from coworkers and friends. To pin a contact or conversation, swipe to the right across any thread.

Not only can you pin a conversation, but you’ll also be able to tag someone in a conversation when you want to get their attention. This will transform the way we communicate in group texts and be a relief to everyone who hates group texts but doesn’t know how to escape without being rude or missing out on the occasional piece of useful information. You’ll also be able to reply directly to a message to create a sub-thread within the conversation to avoid blowing up everyone’s phones in the group. Although we’ve always had the option to start a separate message, this keeps it all within the same thread. To tag an individual, use the @ symbol just like you do on other platforms.

Not that most of us will be traveling abroad any time soon, but iOS 14 has a translation app built-in. Instead of using Google’s Translate app on your iPhone, a native app will convert text or hold conversations with someone who speaks a different language. Current languages include English, Mandarin Chinese, French, German, Spanish, Italian, Japanese, Korean, Arabic, Portuguese, and Russian.

Users have two options. Type the word or phrase you want to be translated, or tap on the microphone on the bottom of the screen to use voice-to-text. Once you’ve finished typing or speaking, the app will translate it to your selected language. I wish I’d had this in France when my Uber driver and I were on opposite sides of a busy street and couldn’t find each other. Though the word “ibis” is spelled the same in French and English, trust me, it’s pronounced quite differently.

If you need more than the pronunciation of a word or to have a sentence translated quickly, turn the phone to landscape mode and tap on the mic icon. You don’t need to press and hold – the phone will continue to translate the conversation.

iOS14 will finally allow users to add widgets to their home screen, a feature Android users have had since 2008. Widgets contain more information and are more functional than app icons, so Apple is pretty late to the party on this one. Instead of swiping to the left of the home screen, you can add them directly to your display. You’ll be able to choose from multiple sizes, and the intuitive Smart Stack widget will show you information from numerous apps when it thinks you need it. For example, it will bring up your calendar, the weather app, and drive time for your commute when you wake up. You can choose to continue to view widgets in Today View off to the left side of your main home screen, or, drag and drop a widget from the Today View onto your home screen.

A second “Android’s had that for years” feature is an app drawer that Apple calls App Library. The feature will auto-sort all your apps into folders, making it easier to find all the apps installed on your phone. To access, swipe left on your home screen, and choose one of three ways to find the app you’re looking for:

Finally, iPad’s popular video in picture-in-picture that creates a thumbnail image of a video that continues to play even when you’re on another app or screen is coming to your iPhone. The feature allows you to switch to a different part of your phone, without pausing or stopping your video. You can drag PiP around your screen, adjust the size of the video by pinching and zooming or even temporarily hide it off the edge of your screen. To exit PiP, tap the X to close. It works with FaceTime video calls and Apple TV, podcasts, Safari, FaceTime, iTunes, Home, and any third-party app that supports PiP on iPad. 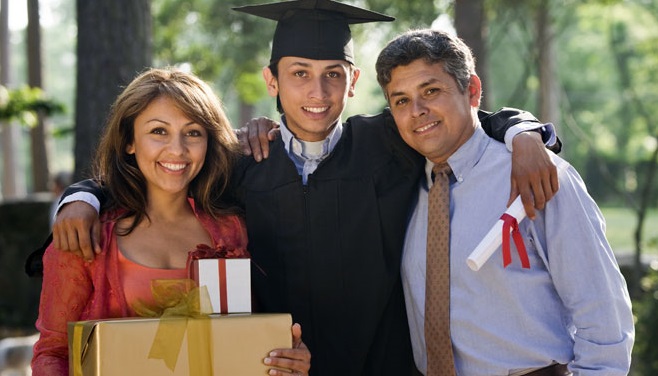 Finding just the right gifts for today’s tech savvy grads can be challenging. But whether they’re heading off to college in the Fall or about to start a new career, the perfect gift is out there and we’re here to help you find it.

Everyone loves a good pair of headphones and whether your grad will use them to listen to “Eye of the Tiger” during a workout or catch a favorite podcast on the way to work, there’s a vast selection from which to choose.  Your options range from less expensive but good quality JVC HA-S400 Carbon Nanotube headphones for under $30, featuring comfortable padding, fold-flat capability and excellent sound quality for the price point, all the way up to $400 Beats By Dre with high-end sound quality, noise cancellation and a maid that will clean your grad’s apartment. Okay, maybe not the maid part.

Choose tiny ear buds that you can tuck in a pocket or purse or DJ-style padded over-the-ear headphones. There are also behind the neck headsets, waterproof headsets, and a variety of wired and wireless Bluetooth options.

Depending on the level of ambient noise in the room, the speaker volume of my iPad is less than adequate. I’d describe it as a loud whisper, like when your Nana wants to tell you a secret. If you are going to play music from your mobile devices, external speakers are a must.

Just as with headphone options, there are a multitude of wireless speakers that provide high quality sound at reasonable prices. The Logitech X300 Mobile Wireless Stereo Speaker (under $70) features a built-in rechargeable battery that lasts up to 5 hours and has a built-in microphone that doubles as a mobile speaker for phone calls. The Sol Republic Punk (under $50) is water- and shock-resistant and offers solid sound levels for its small size with minimal distortion. It has a sizeable battery life (8 hours) and offers an extended wireless range of up to 60 feet.

Touch screens are great until you need to compose a long message or type out an email. Wireless keyboards are ideal for when you need to turn that tablet or smartphone into an impromptu computer. The Logitech K480 Bluetooth keyboard works across all platforms – iOS, Android, Windows – and can link with up to three devices at a time. It offers a built-in tray across the top which acts as a stand for most tablets or smartphones and at under $50 it’s a bargain.

If your grad is all about going green, the Logitech Wireless Solar Keyboard K760 pairs with up to three Apple devices and can be charged by any light source, so you never have to replace batteries.  At just under $80 it’s a little more expensive than the K480 and Apple’s own Wireless Keyboard which is priced at $69.

Help cut the cord literally and figuratively when you send them on the way with alternatives to cable. Whether grads are on campus or moving into an apartment, many are choosing to bypass cable and stream their entertainment choices instead. Price at $100, the Roku 3 has a speedy processor, user-friendly interface, and offers over 2,000 channels, including Netflix, Amazon Instant, HBO Go, Hulu Plus, Pandora, MLB.TV, Amazon Cloud Player, Vudu and Youtube.  It can search across platforms for specific content, and the remote comes with a built-in headphone jack.

If your grad has a lot of Apple devices or has a significant library of music and videos on iTunes, Apple TV could be a better choice. Apple constantly refreshes content and has dropped the price of its Apple TV system to just $69.

It’s cliché to say but graduation isn’t the end, it’s the beginning. Heading out on that journey with fun and innovative technology in your backpack or briefcase can make that new adventure a little less scary and a lot more fun.