A Parent’s Guide to Texting Acronyms 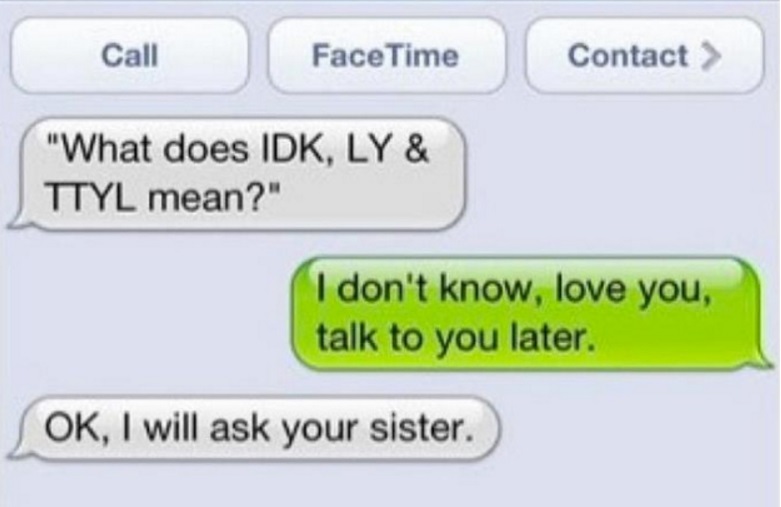 Ever get a text from your teen and have no idea what it says? Or maybe you think “LOL” means “Lots of love” as in “Heard you’ve been really sick, I feel bad for you. LOL.” Or, maybe you’ve seen hashtags, acronyms or phrases on social media that leave you in the dark. Take comfort. you’re not alone. Digital language is constantly evolving and teens will always find ways to communicate so that parents won’t understand.

Once we’ve cracked the code our kids are going to switch to other means of communication, but in the meantime, here’s a parent’s guide to the acronyms your kids are most likely using.

Bae – Before anyone else. Refers to your crush or your significant other. “Bae surprised me with cupcakes!”

#fbf – Flash back Friday. Used on social media when users post old photos and memories on Fridays. “Here’s Taylor and me on a field rip in second grade. #fbf”

FOMO – Fear of missing out. “I wasn’t planning to go but then had major FOMO.”

GNOC – Get naked on camera. That one pretty much explains itself.

GOAT – Greatest of all time. “After that Super Bowl win, no doubt Tom Brady is the GOAT!”

Hashtag – The # sign. Used on social media to link to content trends. It can precede a word, phrase, or acronym and links the content to a media-wide online conversation. “Having a great day! #blessed #lovemylife #tgif”

HMU – Hit me up. Ask for someone’s phone number or social media handle so private/personal messages can be exchanged. IDEK – I don’t even know. “So, are you going to say yes?” “IDEK.”

IDGAF – I don’t give a f***. Refers to both an attitude and a response to a specific question or situation.

LMAO – Laughing my a** off. Used as a response to something you think is really funny.

LOL – Laughing out loud. “The dog is terrified of the cat! LOL”

On fleek – Another way on saying “on point”, as in “Her eyebrows are on fleek.”

PIR – Parents in room. No explanation necessary. POS – 1. Parents over shoulder. You probably don’t need any further explanation for this one either.  2. Piece of s***. Used to describe anything or anyone considered worthless.

RDH – Rate, date, hate. Usually used to ask followers, “How would you rate me? Would you date me? Do you hate me?”

Smash – Euphemism for having sex.

SMH – Shaking my head. Used as a response to something said or done that is so ridiculous there are no words. “She knew she was going to get caught but did it anyway. Smh”

TBR – To be rude. The exact opposite. Used to generate negative responses.

TBT – Throw Back Thursday. Used on social media when users post old photos and memories on Thursdays. “Here’s me and Taylor on a field trip in second grade. #fbf”

TLDR – Too long; didn’t read. Used as a comment on online content, especially when someone posts a long rant. “Whatever, man. TLDR.” Sometimes used as disclaimer by the poster as a summary of a long post.

WCW – Woman Crush Wednesday. The female version of Man Crush Monday, but on a Wednesday. Obviously. WTF – What the f***. Yep. That’s what it means.

YOLO – You only live once. Used to describe an attitude of living for the moment, not getting hung up on life’s problems.

Have other acronyms you want to share? Add them in the comments below and you’ll be the GOAT! 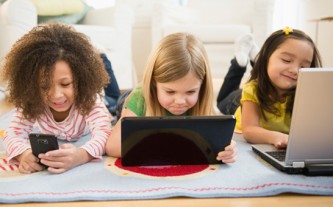 Setting Boundaries for Family Tech Use