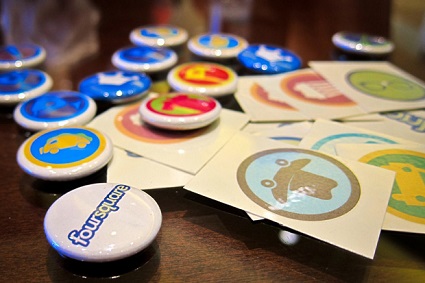 Gamification is one of the most impressive trends in technology today. It involves applying game-design to certain applications to create a more fun and engaging experience. Rewards for accomplishing certain tasks might come in the form of points, badges, or virtual currency.

Many of us were introduced to the gamification concept by using the location-based app Foursquare, which awards points and perks for “checking-in” to places. Earning points at restaurants and sporting goods stores was my big buy-in. Gamification turns a user into a player and helps generate enthusiasm!

As educators at Teachers College Columbia University, Joey J. Lee and Jessica Hammer, wrote in their paper Gamification in Education: What, How, Why Bother?, “Gamification attempts to harness the motivational power of games and apply it to real-world problems — such as, in our case, the motivational problems of schools.”

That whole “spoonful of sugar” connection can help in the areas of independent study, team building and student motivation. When users have a more inviting experience, they tend to have a more stimulating and rewarding experience with whatever task they are attempting to accomplish.

Another example is the utilization of games like SimCityEDU, which teaches students STEM subjects (science, technology, engineering and mathematics) in a virtual environment, which is highly likely to enhance the usual classroom experience! Educators embrace methods to learn in disguise, so long as the methods are results-driven. Last year, it was announced that there would be a classroom version of DanceDance Revolution for physical education classes.

A Nike program incentivized runners to track their runs with an accelerometer in their running shoes. The runner can plug the device into a computer and track their results against friends via letter boards. Accountability and healthful competition keep players on their toes!

Sometimes recognition is reward in itself. When Microsoft faced a challenge, it set up a competition with its employees, turning the mundane task of manually checking dialogue boxes in multiple countries and languages into a game. Although testers were not given monetary rewards, the most successful office was publicly acknowledged.

Agragati Siegel, chief operating officer of Gamesync Gaming Center in San Diego, shared with me that his company has been using gamification marketing programs for about a year. They incentivize gamers to achieve certain tasks via home gaming and reward them once they return to visit his facility! Clever, right?

That is the nail on the head for marketers: Keep ’em coming back for more of a good thing; encourage community building and engagement; and celebrate milestones! As PC Mag reports, social marketing company Gigya found that gamification increased consumer commenting by 13 percent and consumer sharing by 22 percent. According to market research analyst Gartner, “more than 70 percent of Global 2000 organizations will have at least one gamified application by 2014.”

Wise words for gaming enthusiasts: Watch your budget and the clock, and win it!