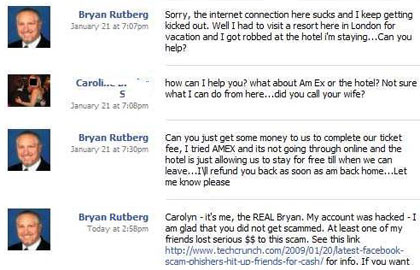 The problem of imposters taking over accounts or posing as friends on social networking sites has become so bad that the FBI issued a warninglast week alerting consumers to the growing problem. “Fraudsters continue to hijack accounts on social networking sites and spread malicious software by using various techniques,” the warning said. The agency says it has logged over 3,200 complaints about such incidents since it began keeping track less than two years ago.

Meanwhile, Facebook, the most popular social networking site in the world with over 300 million members, posted its own warning. “Recently we have noticed an increase in scams where people’s login information is collected through phishing sites and then their accounts are accessed without permission to ask friends for money. While the total number of people who have been impacted is small, we take any threat to security seriously and are redoubling our efforts to combat the scam.”

The post then goes on to describe the most commonly experienced attack, also known as a 419 scam, where fraudulent individuals hack into Facebook accounts, pose as the owner and claim to be stranded in a foreign country without access to money. Once they are logged in, the scammers send messages and even post status updates to the person’s profile asking friends to wire money. Facebook even posted a transcript of a real chat conversation between a Facebook user and a scammer to its security page, so members would know what to look for if they ever found themselves in a similar situation.

The increased emphasis on social networking security is timely. There have been some very real and well-publicized losses. In January of this year, MSNBC reported on the case of Bryan Rutberg, a Seattle resident, who found out that his Facebook account had been hacked after concerned friends started calling his cell phone non-stop to offer help. Many had received an e-mail with the story that Rutberg had been robbed at gunpoint while traveling in the UK and needed money to get home.  Because the hackers had changed his log-in credentials, he was locked out of his own account and couldn’t alert friends to the scam. It took him 24-hours to deactivate the account but not before a friend had wired $1,200 to a Western Union branch in London.

Facebook offers some useful tips on how to be smart and aware when using its site. They are well worth reading. MySpace and the other major social networks do the same. The golden rule: never part with money based on an IM, e-mail or any other kind of Internet message. If you haven’t received a phone call, then you can be almost certain that the request is bogus!