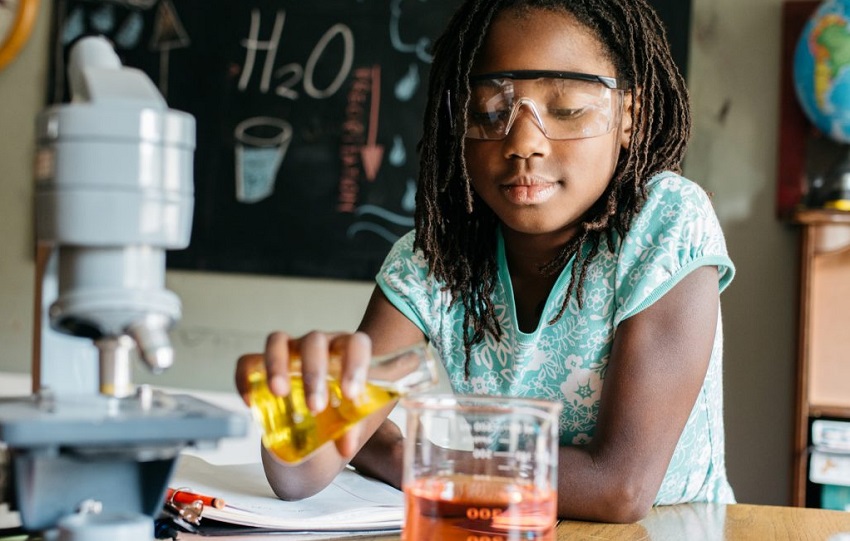 While watching a news report about the long-term effects of oil spills on the ocean, then 15-year-old Keiana Cavé was intrigued. She suspected the damage was worse than what was being reported and was inspired to do some research of her own.

“I remember watching the news and the news anchor was talking about the after effects of the BP oil spill and I remember thinking there are probably some issues left [unsolved],” she says.

So Keiana got to work. She entered her 9th grade project on the impact of oil sitting on the surface of the ocean in her hometown science fair and won. Now 19, she’s studying chemical engineering at the University of Michigan, has published two research papers, holds two patents, helped develop a molecule that will help disperse the carcinogens present after an oil spill, and has been given funding by Chevron to continue her research. Keiana is determined to make an impact with her research and determined that girls, especially girls of color, feel empowered to pursue careers in STEM.

So what exactly is STEM? It’s simply an acronym created to address the shortage of skilled workers in Science, Technology, Engineering and Math and the lack of educational opportunities to pursue these subjects. Instead of teaching each as a stand-alone subject but rather using an inter-disciplinary approach and combining the subjects, students will have a greater understanding and a more fun learning experience, which in turn will encourage more young minds to pursue careers in these fields.

Not only is there a shortage of highly skilled professionals in STEM, there’s a disproportionate number of men over women. While women make up half of the total U.S. college-educated workforce, they make up only 29% of the science and engineering workforce. According to The National Girls Collaborative Project, “Female scientists and engineers are concentrated in different occupations than are men, with relatively high shares of women in the social sciences (62%) and biological, agricultural, and environmental life sciences (48%) and relatively low shares in engineering (15%) and computer and mathematical sciences (25%).”

That gender gap starts as early as Kindergarten. Although there’s no gender-based ability gap, stereotypical gender roles for boys and girls have a significant impact on the way children view STEM subjects. It starts at home and is initially framed by the way we parent our sons vs. our daughters. If children – especially girls – lack exposure to science concepts and informal learning during preschool, they’ll start kindergarten with a physical and natural science gap that often follows them for the rest of their academic careers.

So what’s a parent to do? Obviously, we want our kids, regardless of gender, to pursue their dreams and make the most of their gifts and abilities. But, if we want to close that STEM equality gap, start by pointing out strong female role models from the time your children are young. Choose a female doctor or dentist for your kids. Look for news stories about female astronauts, doctors or researchers, and learn more about them.

Empower your girls by teaching them to explore, experiment and ask questions. You don’t have to know the answers – that’s part of the fun. Help them look up the answer to questions like “Do bugs close their eyes when they sleep?” or, “If the earth is round how come we don’t fall off?” Look for books, documentaries or invest in amazing STEM-focused toys like Goldieblox, an Osmo coding kit, or any of the incredible STEM-based toys created by Elenco.

Go to museums, take nature walks, subscribe to National Geographic, do science experiments in the kitchen, encourage imaginative play and give them unstructured free time to explore and experiment. Your daughter may grow up to be a teacher, a ballerina or research scientist at the South Pole – it doesn’t matter, as long as they know those STEM opportunities are there for the taking.

Keiana’s advice to other women considering a career in STEM?

“Follow what you want to do no matter what. Maybe you don’t look like them and they might not think that you know as much as they do but you have to prove you do. Keep your head down and work really hard.”